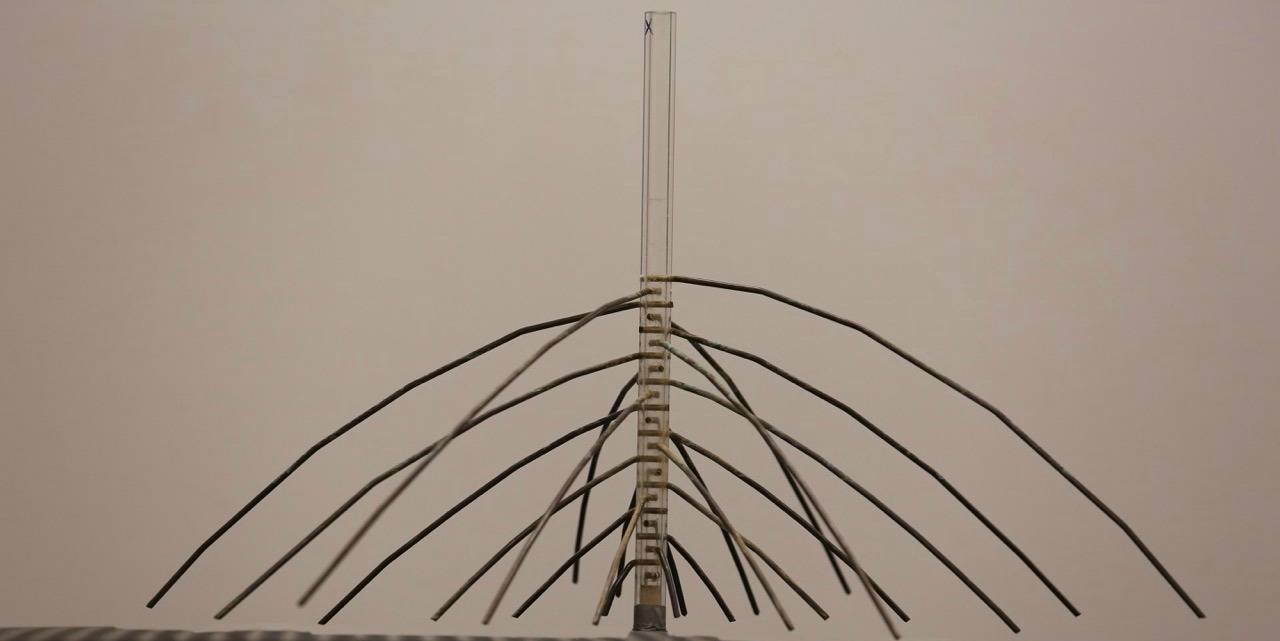 In coastal regions around the world development, sea level rise, and increasing storm intensity have produce ever increasing risk of environmental and socioeconomic damages. The 2014 report of the Intergovernmental Panel on Climate Change (IPCC) highlights the important role of ecosystem-based coastal protection, including the use of mangroves and salt marshes as a buffer against damage to coastal communities. Furthermore, mangrove ecosystems provide other services such as nursery area for fish production, biodiversity, and carbon sequestration. In this study, led by Dr. Maria Maza [now at IH Cantabria], a 1/12th scale model mangrove forest was constructed to study the flow adjustment near the forest edge and to characterize the hydrodynamic drag on individual trees within the complex root geometry. This parameterization of root drag will lead to a better quantification of coastal protection provided by these ecosystems. Undergraduates Katie Adler, Diogo Ramos, and Adrian Garcia conducted the experiments. 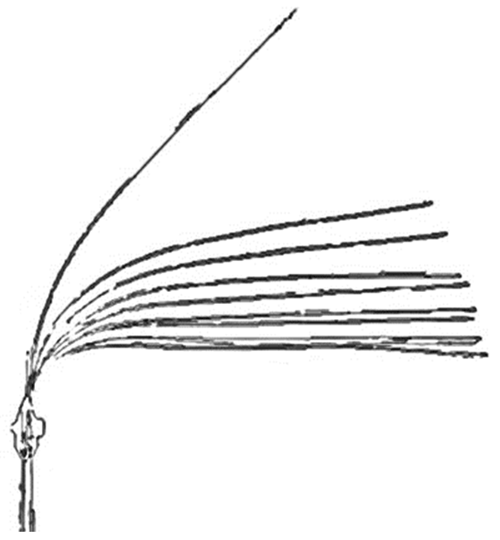 Seagrass and other freshwater macrophytes acquire nutrients from the surrounding water through their blade surfaces. The nutrient flux depends on the current speed, U, which influences both the posture of flexible blades (reconfiguration) and the thickness of the flux limiting diffusive layer. The impact of current speed (U) on mass flux to flexible blades was studied using model seagrass blades constructed from low-density polyethylene (LDPE), which has a high affinity for 1,2-dichlorobenzene, the tracer chemical (model nutrient). The mass flux was measured at different current speeds. The degree of blade reconfiguration depends on the dimensionless Cauchy number, Ca, which describes the ratio of drag force, which tends to bend the blade, and blade stiffness, which resists bending. For large Ca, most of the blade was parallel to the flow, and the measured transfer velocity agreed with flat-plate, laminar-boundary-layer theory, with transfer velocity proportional to square root of current speed. For small Ca, the model blades remained upright, and the flux was diminished relative to the flat-plate model. A meadow-scale analysis suggests that the mass exchange at the blade scale may control the uptake at the meadow scale. 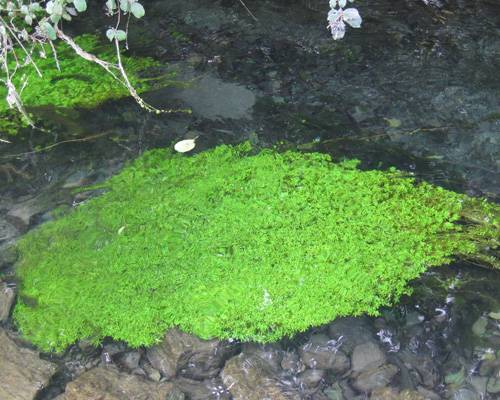 The hydrodynamic exchange at the interfaces between water, sediments and vegetation controls a variety of physical, biogeochemical and natural processes that are of critical importance for aquatic ecosystems. This project, led by Prof. Andrea Marion (Univ. of Padua), brought together researchers from many institutions and disciplines to provide a better description of aquatic ecosystems that can drive better environmental policy for the protection of water resources and habitat. You can learn more about the project in this documentary. Vimeo Link 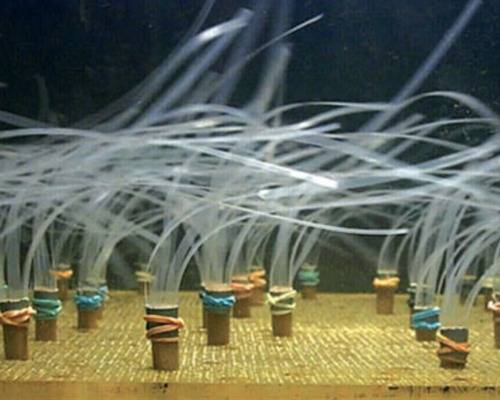 A plastic model of eelgrass was created by graduate student Marco Ghisalberti to study the onset of monami and its impact on vertical exchange between a submerged canopy and overlying water column. The plastic model is dynamically similar to real seagrass in rigidity, buoyancy, and drag profile. Photo by Marco Ghisalberti.
Vegetation Hydrodynamics

Fresh and salt-water wetlands are important transition zones that control exchanges of sediment, nutrients, and pollutants between terrestrial and aquatic systems. Wetland plants contribute directly through uptake and biological transformation and indirectly by altering the hydrodynamic regime. Submerged vegetation, such as seagrasses, serve a similar role in coastal regions, controlling nutrient loads and altering water clarity by promoting particulate deposition. Professor Nepf’s research examines the hydrodynamic aspects of vegetation, e.g. the turbulence and transport processes associated with flow through and around aquatic canopies, in relation to canopy morphology, flexibility, and degree of submergence. The goal is to understand the effects of vegetation on marsh and coastal hydrodynamics, and to use this understanding to describe the role of aquatic vegetation in controlling particulate and pollutant fate in coastal regions. 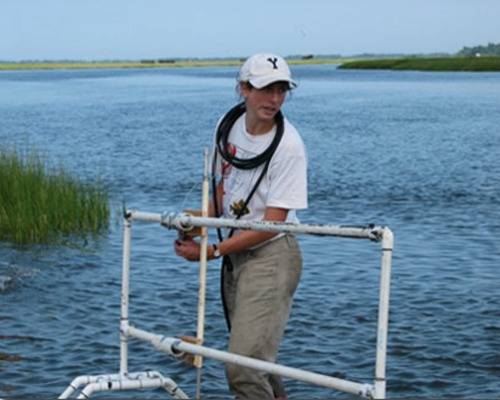 To understand wetland ecosystems we must first understand the pathways of fluid transport within these systems. Transport involves both advection and dispersion. Advection is the bulk motion associated with the mean flow, and dispersion is the rate of spreading associated with spatial and temporal deviations from the mean flow. For example, aquatic organisms rely on transport by water currents for the dispersal of larval stages, and aquatic plants rely on water currents for seed dispersal and pollination. Further, many organisms use chemical signals for information on foraging and mating, and these signals are shaped by advection and dispersion. This field study will measure the velocity structure and dispersion within an emergent salt-marsh and test models that predict advection and dispersion from the distribution of vegetation biomass. 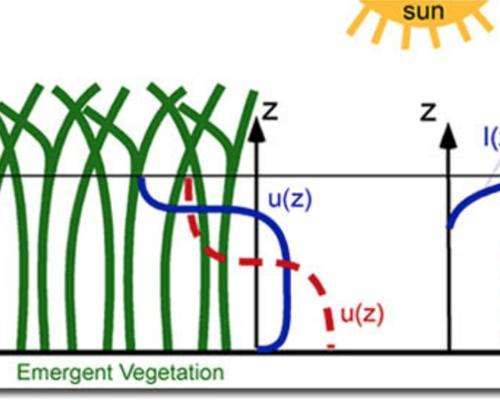 Emergent vegetation provides shade to the water column, so that during solar heating the temperature in the open water rises more quickly than in the canopy. The resulting horizontal gradient in water temperature (and thus density), drives a horizontal exchange flow that carries fluxes between the chemically distinct regions of the canopy and open water. This flow can play an important role in lake-scale chemistry and ecology by promoting exchange between stagnant, littoral regions and open water offshore. We are using field and laboratory experiments to observe the formation of thermally-driven exchange flows between open water and water with vegetation of different morphology and with different levels of light penetration. For example, the figure shows two levels of light penetration. When the surface energy flux, Io, is rapidly absorbed by turbid water (blue I(z) curve), the surface heated layer is thin, producing a thin intrusion into the canopy and a wide outflow. In contrast, when Io is distributed over the full water depth (red I(z)), the intrusion and outflow are symmetric. Our studies will ultimately guide the development of models that predict the frequency, duration and spatial footprint of these flows based on meteorological data. The models will enable researchers and lake managers to evaluate how changes in the littoral zone may impact the lake-scale nutrient budget and ecology.

Exchange Between Channels and Vegetated Banks

Wetland transport is often determined by a branching network of channels that cut through regions of vegetation. The channels provide most of the flow conveyance, but the vegetation provides most of the bioremediation and particle trapping. Thus, the exchange between the channel and vegetation is a crucial dynamic in determining the overall wetland function. This project uses laboratory experiments to study the transport between an open channel and adjacent vegetation. The figure shows a top view off our laboratory channel. The left side is filled with an array of circular cylinders, representing the vegetated bank. Dye is released in parallel filaments to reveal the structure of fluid motion near the canopy-water interface. The dye is fluoresced using a blue light. The filaments are distorted by coherent vortices generated at the interface. The vortices control lateral exchange. Detailed velocity profiles are measured using Laser Doppler Velocimetry (LDV). The models developed in the project will contribute to numerical representations of wetland circulation. The numerical tools will enable stakeholders to predict changes in wetland function that arise with proposed development and land-use changes.